The Tour D’Afrique (a long distance cycle race from Cairo in Egypt to Cape Town in South Africa) ended this past weekend on the 15th of May. Our CEO, Gerald Corniel is one of the riders who managed to complete the 12000 km journey over the length of Africa. It’s a truly remarkable achievement. The Junk Mail Team would like to congratulate Gerald Corniel (and his fellow riders) on their completion of the journey.

This is the final update Gerald Corniel posted on his blog about the Tour D’Afrique:

“This is it, this will be my last and final posting on this blog, so let me first thank each one of you who have read and followed my African ride. Thank you for the many messages of support and encouragement. I can now tell you that they were times when I seriously considered if it was worth going on riding, feeling sick, tired and at the worst pissing blood. But knowing that you guys were out there following me and cheering for me often gave me that extra courage one needs to ignore the pain signals your body sends you and to keep riding. keeping this blog updated was a challenge I enjoyed tremendously and I tried all along to do it as soon as I would reach camp, sometimes starting to write in my dirty cycling shorts in order to share it with you guys while it was “hot”. They were many technical challenges too, especially in Sudan and Ethiopia where access to electricity was just as short as to clean water and Tanzania were I sometimes had to walk a few kilometers with my computer in order to find a weak cell phone signal on top of a hill in order to connect to Internet. Another challenge was to keep all these equipment running in the dust and the heat of the Sudanese desert, the humidity of the equator, the shocks of thousands of km of corrugated roads in the truck, the leaks in my tent in Botswana and so on… Eventually it was gonna be a smart virus that would give me the most trouble and destroy my computer….  Anyway as a token of consolation, my blog won the honorary price of “best TDA 2010 blog”, a nice confirmation that our efforts to keep this blog going despite the many challenges have been appreciated.

I have done it, I have made it EFI to Cape Town, 12 000 km on my bicycle without ever getting on the truck or missing a single inch. Out of the 60 who started in Cairo, 12 of us have achieved this. It is something, I am particularly really proud of, especially given the fact that I am the oldest EFI of the group and given all the physical troubles I went through, it makes this performance even more enjoyable afterwards. I am also the first French citizen ever to join the EFI club since the creation of the Tour D’Afrique 8 years ago.

I am not going to bore you with long and  philosophical conclusions about this tour, it is impossible anyway to wrap it up in just a few words, but here are a few impressions I would like to share with you.

Tour d Afrique makes you look older but feel younger, it is also very stressful. It is like a 4 months long marathon. You need a holiday after this and a lazy one. Jumping back into a “normal” life is my next challenge. I started immediately yesterday afternoon by throwing away the one and only set of clothes I have been wearing since January and dressed myself from toes to top at one of the waterfront shops.  I also went for a hair cut and shaved. The images of all the places we went through are now starting to roll in my mind and for the first time this morning I started talking about this race using past verbs. 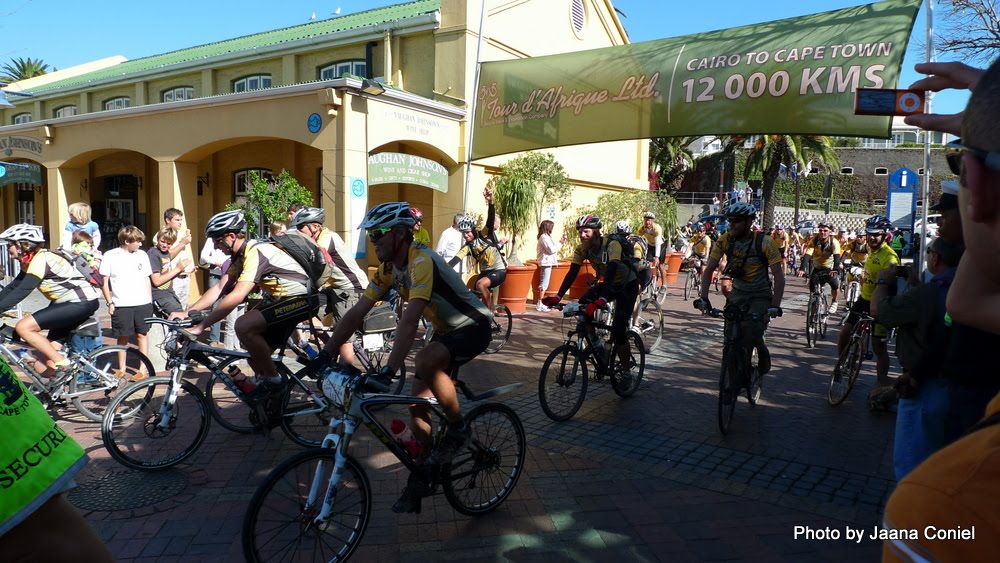 Africa is an amazing continent, it is poor, dis-organised, corrupted, but yet so friendly, so full of delicious surprises and again as I have stressed so often in this blog, people have very little but they still share it. Africa loves singing, Africa loves dancing, Africa lives on the hope of better days and it often gives you the impression that it accepts its faith a bit too easily, “God willing” as you hear so often. Riding across Africa is not easy, there are still plenty of barriers against cyclists: a bicycle is still far too often seen as the method of transport for the poor and African drivers have very little respect for cyclists, making it difficult for us. I had to jump off the road at numerous occasions to save my life. The real danger in Africa is not the last few free roaming lions or poisonous snakes as many still believe, but simply bad drivers.

I was forced to witness the rapid expansion of China in the continent, building roads and infrastructures in most places we passed. I was also surprised by the strong influence of South Africa, especially south of the Equator. South African companies are opening retail outlets all over. I am more optimistic about that one than about the Chinese presence…

Africa did not disappoint me, it scared me, it made me laugh, it gave me joy, it made me dream, it also taught me new things about life and even about myself.

To conclude, here are a few logistical numbers,

We have been posting updates about the Tour D’Afrique over the last few months on the Junk Mail blog.