Tour D’Afrique Update: From Luxor to the Nile

The Tour D’Afrique started on the 16th of January 2010 at the Pyramids in Egypt (just over a week ago). So far the competitors (including our CEO Gerald Corniel) have made their way to the Nile. This is an update on their progress

Gerald Corniel says “”Today was the first time that we felt,  that we are now leaving behind the last bits of Western civilization and entering  to a completely unknown world. People and sceneries have now changed completely. We rode 115 km from Luxor towards Aswan along the Nile. It was the ride of a life time. People her are already part of the Nubian tribes, much darker, they don’t speak any English and kids are getting more difficult to deal with. I had my first stone thrown at me, luckily a miss, because it was big and the guy really wanted to heart me. Then a few kilometers later another guy tried to throw a stick into my front wheel, but luckily it bounced off. I got so upset that I caught the guy probably still a teenager and beat him up. A few local adults who witnessed the scene applauded. The life along the Nile river is just unbelievable and feels like a giant termite nest. It is so busy! By the size of every vegetable that is grows here, you can easily see how fertile the land is here….” 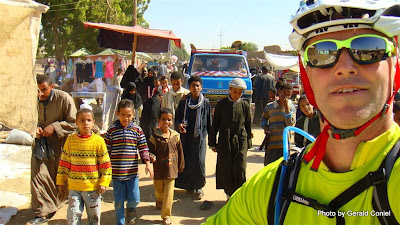 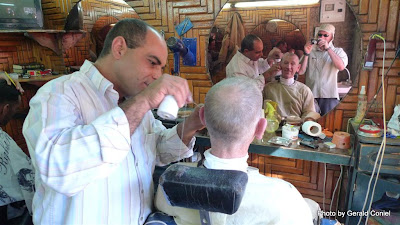 Gerald Corniel says “One of us went to the barber shop and he discovered they use a very painful technique with cotton strings to remove face hairs.” 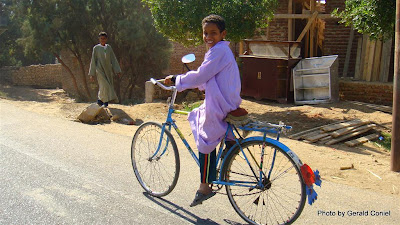 Gerald Corniel says “Today the kids were a lot more exited about us than up to now,many run straight at us creating dangerous situations while other starting chasing us with their bikes. Given the already complicated traffic here, it adds up to the challenge….” 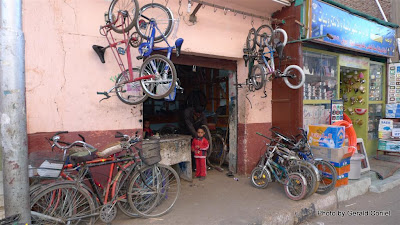 Gerald Corniel says “While walking in the little town where we sleep tonight, we found the local bicycle shop”

For more updates on Gerald’s progress in the Tour D’Afrique check out his African Ride Blog.

For more information about the Tour D’Afrique read our previous post on this topic.