Tour D’Afrique Update: One of the most difficult days

Our CEO, Gerald Corniel is currently competing in the Tour D’Afrique, a long distance mountain bike cycle race from Cairo (in Egypt) to Cape Town (in South Africa). He’s travelled a long way already. He’s currently doing stages in the race in Tanzania.

The following update was posted on his African Ride blog yesterday:

“I had the most difficult day of the tour so far and I need to recover, so not much time to compose here. I woke up this morning with a strong pain in both knees. Tendinitis… The thing you want to avoid at any price. I knew I was in trouble as even getting out of bed was hurting. So, not much choice but to get on with it and try not to damage the knees further. I rode too hard yesterday, and this morning I am paying the price. A bit stupid of me, we were told that there were hotel rooms at the camp, so I pushed real hard to get there early as there is always a limited supply of rooms. I got a room, but it ended up being worst than my tent. It was so hot in there I could not fall asleep and the mosquito net hanging over my bed had so many holes in it, that it actually did a great job at retaining the mozzies inside after they had taken their share of my blood. The shower did not have hot water and it spilled water all over except inside the shower itself…. The toilet was a real flush toilet except that it kept on flushing all the time… Ultra luxury, they had a TV in the room with 2 channels tuned. A local one in Swahili and a Chinese one… Hum… The Chinese again… 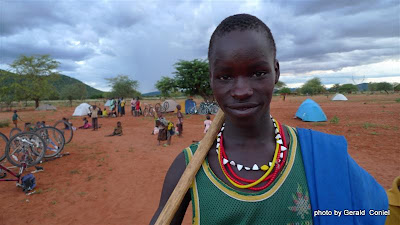 Anyway, back on the road I was hurting badly and unfortunately there is nothing much you can do with knee pain when you need to cycle 95 km on a sandy dirt road.The best strategy was to ride slowly at high cadence which I did. Andre and Michelle, two South African riders saw me in pain and stopped as they passed me. Andre pulled some Voltaren pills out of his camelback and gave them to me. It was nice to see how concern the other riders of TDA were and how they tried to help. The Voltaren pills did help a bit and I could cycle a bit faster later that day. But as you know about Murphy’s law, bad news often happen is series, I also had my worst puncture day ever! I had a total of 6 punctures today, yes 6. Imagine that up to now, I only had 2 and that was over 6000 km. I managed to get 6 in 45 km this afternoon. I only realised that it was not bad luck, but some of the worst thorns ever on the route when I finally made it to camp after a 10 hours ride… Needless to say, I was last by far. I was surprised to see how many people were fixing tubes and tyres at camp, until I heard that just about every rider had had similar experiences. Some even run out of patches and had to push their bikes to camp…. He he, so at least, that made me feel a bit better. It was not bad luck, but simply super thorn territory here. I am using special tubes that have a green slime inside them that is supposed to seal any puncture… Well, the manufacturers should come and test these tubes here in central Tanzania. I have never seen anything like that. My tubes just spilled that green stuff out and could not help these super thorns… So I run out of tubes, and had no choice but start patching them. Not easy under this heat and sand. I had to use plenty of saliva to spot the numerous holes and soon my tubes looked like they had been hit by a chicken box infection… 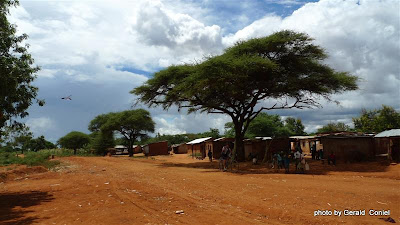 It was a relief to see the finish line flag, after such a challenging day. I was exhausted and even dehydrated as I run out of water since I did not expect to be on the road for so long.

Well, at least mission accomplished, I managed to preserve my EFI status and I think that I also managed to keep my knees in a stable condition. I have been lying inside my tent and I put some cream on them. I hope the night will do them good. We still have 2 hard off road days before we will enjoy a full day rest in Iringa.”

Watch this space for more updates on Gerald Corniel’s progress in the Tour D’Afrique.